What a moving sight– French flags hanging out windows and in front of shops all across the city. It has already been two weeks since the shootings in Paris and today we are honoring those who died. In the 12 years I’ve lived in France I’ve never seen such a beautiful patriotic act. While the French are very proud of their culture, history, food and country in general, they are by no means “flag flying” types. As an American, I relish the thought of our family wearing matching forth of July flag t-shirts from Old Navy. But the French aren’t usually like that. But today, many French people flew flags as a way to show their solidarity. 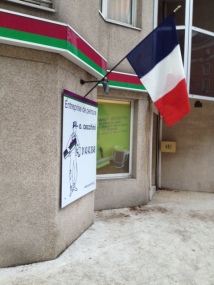 I got a lump in my throat as I ran my different errands. At the library I saw the front page of one of the French newspapers: it was black with white text listing out the names of the men and women who were gunned down. Simple and moving. I don’t know any of those men and women personally but I really wish we had a flag to fly out our window tonight. Paris does feel like home.

A verse that Dave and I have been reading and thinking on lately comes from Jeremiah 29. When people think of this chapter they usually think of verse 11, “For I know the plans I have for you, declares the Lord, plans for welfare and not for evil, to give you a future and a hope.” But just before that it is written:

“Thus says the Lord of hosts, the God of Israel, to all the exiles whom I have sent into exile from Jerusalem to Babylon:  Build houses and live in them; plant gardens and eat their produce.  Take wives and have sons and daughters; take wives for your sons, and give your daughters in marriage, that they may bear sons and daughters; multiply there, and do not decrease.  But seek the welfare of the city where I have sent you into exile, and pray to the Lord on its behalf, for in its welfare you will find your welfare.

Like the Israelites, Dave and I have been called to live in a foreign land (we’re not exiles, so let’s not get carried away with the parallels) but these verses really speak to us. Paris is our home, our three babies have been born here, we want to seek the good of this city. That’s why seeing those flags fly in our neighborhood today resonated in such a deep way; Paris is home. And in this city, I believe God has good plans for our lives and desires good for those who live here.

Hi, I'm Heidi! Dave, my husband, and I lived in Paris for eight years and our first three kids were born there. After suffering from burnout in ministry, we moved to Orlando, FL and I've experienced a wonderful season of renewal in my faith. We've also added two sons to our crew since moving to the U.S..

This is a place to share some of the ups and downs of motherhood, the fun of street finds, repurposing, easy recipes and journey of the soul. Thanks for joining me!